The Feeling of the Earth 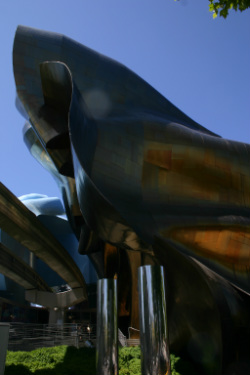 But then as he peered out through leafy branches, the sky tore open--abruptly, distorting, and bubbling out, a darkness looking at first like a black globbed mass, like dark spittle on a French trapper's beard, but then widening, widening, widening...until he, Wore Wolf Teeth, inched back with dread. This deadly vision came from the spirits, not from any bodied foe...Widening, the dark, translucent bubble continued enlarging.

Then the sky tunnel of smoked blackness swallowed the whole horizon and out of the cavernous maw charged, stormed, barraged a drab-gray monster. What dreadful evil spirit? Or could it be a severe warning, an omen to him from the Great Spirit?

He gripped his medicine bag hanging from his neck, crawled out of the brush, stood and said, "I am of the Chaticks-si-chaticks (Men of men)!

Above, the gigantic dark-gray spirit hovered pulsating, threatening, and behind it the blackened sky, endless tar, darkening the world.

Only 3 miles away, horses of an Oregon-bound wagon train skittered and bucked; one large roan knocked its rider to the ground. Men looked up in shock, bewildered by this sudden pitch darkness.